Nonfarm payroll employment increased 850,000 last month, the biggest jump since August 2020, according to the Bureau of Labor Statistics. Reportedly, residential specialty trade contractors increased by 13,000, however employment in construction overall is 238,000 lower than February 2020.

Alex Roha of Housing Wire reports on the jobs data, noting that “residential construction employment (including specialty trade contractors) rose by 15,200 last month, a more robust pace than in recent months, and a positive indicator for a sector facing severe supply constraints…In May, the overall construction sector actually lost 20,000 jobs, though it was mostly concentrated among nonresidential specialty trade contractors.”

Jack Kelly of Forbes comments on the reasoning behind the positive employment numbers. “The wealth effect helped out too. The stock market has been hitting record highs. Real estate and home sales are blazingly hot. This makes people feel financially secure and comfortable to spend money, which helps stimulate the economy—thereby creating a need for more jobs.”

Jing Fu of the National Association of Home Builders (NAHB) describes that the industry with the biggest increase was leisure and hospitality, leading the charge with a gain of 343,000 jobs. 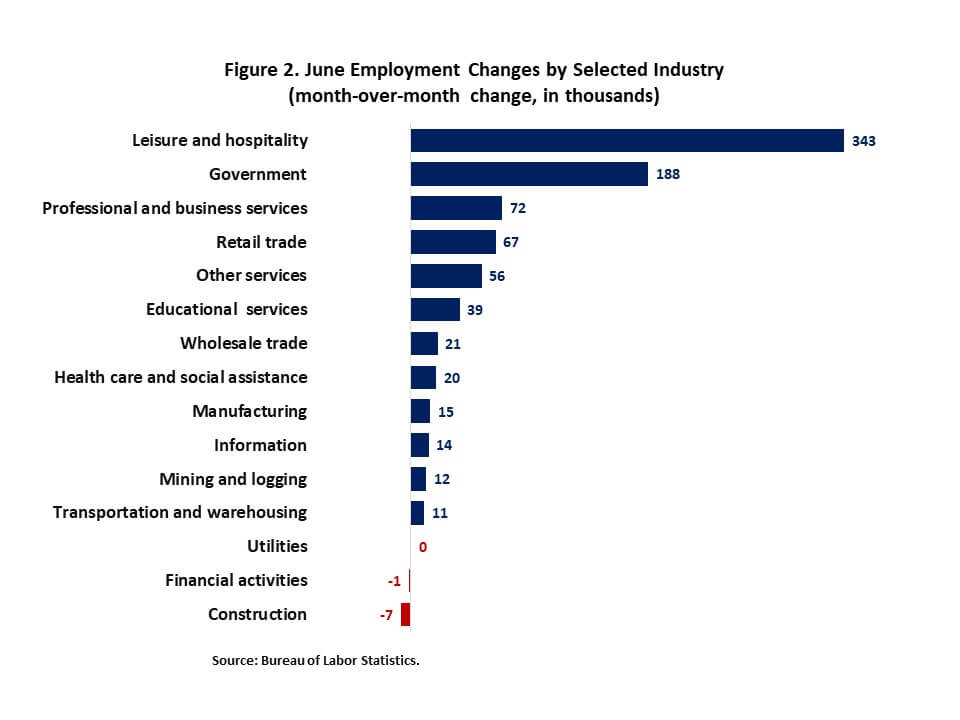 Further, according to Fu, “Over the last 12 months, home builders and remodelers added 193,700 jobs on a net basis. Since the low point following the Great Recession, residential construction has gained 1,049,700 positions.”

The general idea goes that as inflation increases, so too do interest rates in an attempt to keep downward pressure on even higher inflation. But that is not exactly what we are currently experiencing in the recent months when inflation has seen its highest gains in decades.

According to Matthew Speakman of Zillow, despite inflationary pressures, mortgage rates have been falling.

“The muted reaction to the highest annual change in the core personal consumption expenditure (PCE) price index in nearly three decades was the latest evidence that investors are buying into the idea that rising price pressures are transitory, and more accurate readings on inflation will come only after supply chain restrictions ease…Combined, longer-term Treasury yields have retreated in the last couple months, even as shorter-term yields have risen, keeping downward pressure on mortgage rates.”

A new report from the Urban Institute shows that for the rest of 2021, the respective projections for Fannie, Freddie, and MBA on interest rate levels are 3%, 3.2%, and 3.5%.

“Despite historic low interest rates, increases in home prices have pushed affordability to the worst levels since 2008. As of April 2021, with a 20 percent down payment, the share of median income needed for the monthly mortgage payment stood at 26.1 percent; with 3.5 percent down it is 29.9 percent. These numbers are well above the 2001-2003 median, and represent a sharp worsening in affordability over the past year.”

Erik Martin of Bankrate reports that despite inflation ticking upward, most economists believe it to be transitory, which is why mortgage rates have remained relatively flat at their current historic lows.

Cruise ship condos could soon be docking at a port near you. And, for a cool $11 million, one of these luxury floating apartments can be yours. According to their website, the Somnio superyacht will be the largest yacht in the world, will feature 39 apartments, and will be on a neverending global itinerary of carefully selected destinations.

According to CNN, Somnio measures 728 feet and will launch in 2024. Winch Design and Tillberg Design of Sweden are the design companies behind the project, at a cost of around $600 million.

According to The Real Deal (subscription required), “The nearly $600 million project is being led by Carl Le Souef, founder of the skincare company Private Formula International…condo owners will have access to a 10,000-bottle wine cellar and other amenities similar to a luxury hotel or residence.”